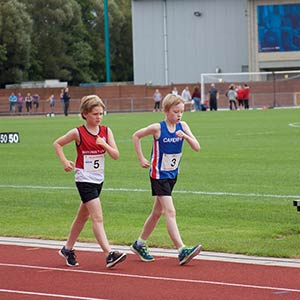 The Cardiff Athletics Academy provides a structured introduction to athletics where, under the guidance of appropriately qualified coaches, Academy members will experience the full range of athletic events and learn about training techniques.

Academy sessions are designed to be fun and to provide a broad experience of different events (running, jumping, throwing), how to train properly and safely, warm-up and cool-down procedures and track etiquette. At the appropriate time Academy athletes will progress to a specialist training group under one of the club's qualified coaches.

New members, especially younger ones, often join the club with an interest in a particular discipline (say, sprinting) but find that, in fact, they are talented in a quite different discipline. Budding sprinters often find that they are good at hurdling or long jumping, or vice versa. This is the benefit of joining a wider group at the outset and before settling on a speciality.

The Academy is organised into three terms of twelve weeks each year and these follow approximately the school terms. Our sessions are on Monday, Tuesday and Thursday evenings between 6pm and 7pm. Training groups are split into competition age groups. These are Under 9's, Under 11's, Under 13's and under 15's and subject to availability could be on any night.

Athletes usually discover which event(s) they would like to specialise in by the time they reach 14 or 15, at which time they move into one of the event development groups. These groups train twice per week, currently on a Monday and Thursday. Transfer from the Academy takes place at the end of each term.

Academy membership costs £66 per term (includes track fees) in addition to which each member must be a full member of Cardiff Athletic Club (subscription currently £45 per year) and, in order to compete must be registered with Welsh Athletics (current registration fee £11.00 per year). Academy members receive a training T-shirt upon joining and a report at the end of each term.

To join the Academy, please enquire at the club room for the Academy Administrator (Gayle Farrell), email us at Academy@CardiffAAC.org or simply apply online. 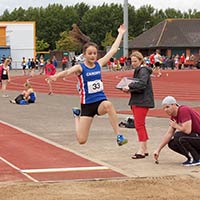 Young athletes get competition with their schools and the club provides additional opportunities including important UK leagues and national championships. All members are expected to compete when selected for club teams.

Athletics takes place the whole year round, with cross country in the winter (September to April) and track and field events in the summer (April to August). There are indoor track and field events during the winter (mostly held at the Welsh National Indoor Athletic Centre [NIAC] at Cardiff Metropolitan University, Cyncoed) and, for older runners, there are also road races and relays.

The main cross country event of the season is the Gwent Cross Country League which covers all age groups from under 11 (school year 4 & 5, minimum age 9) to seniors and is held at various venues in Wales and the West. Athletes are entered by the club but there is no limit on numbers.

The indoor track and field events include open-to-all competitions and various championships. Athletes need to enter individually but guidance is always available from a club official.

During the summer, club teams take part in various leagues both in Wales and elsewhere in the UK. For juniors, the relevant competitions are:

Cardiff AAC competes in the East Wales League along with clubs from Aberdare, Cwmbran, Newport, Hereford, Blaenau Gwent and Rhondda. Selection is made by the team manager with a “Run, Throw, Jump” approach. The club can select up to 4 athletes per race/throw/jump and each athlete may compete in three events plus a relay. 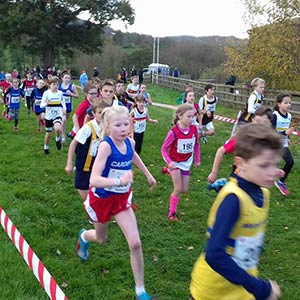 This is a great way to be introduced to competitive athletics with the emphasis on enjoyment and taking part in a variety of events. It is not a “win at all costs” competition.

Parents are expected to help out with our track and field officials (by raking the sand pit, etc.) and this can be a great way to enjoy the day.

This league takes in all the clubs of the UK and Cardiff Athletics is in the Premier Division. This is a big step up from the Welsh Junior League. Four athletes (two boys and two girls) are selected for each event by the team manager. As this is a very important league, the best possible available team is selected and, if selected, athletes are expected to compete.

During the summer there are regional and Welsh national championships for all age groups and club members are encouraged to enter these. Entry to championships has to be made individually and there are deadlines to be met. Full details, including entry conditions, can be found by checking the club’s website and that of Welsh Athletics and the relevant organiser. Alternatively, ask your coach or a club official.

Open meetings are organised around Wales and these are a very useful source of competition for all age groups. Again, check with the various websites or ask.

The club organises transport by coach to most of the away league competitions and to help with the cost and to cover competition entry fees, a match fee is charged and is payable to the team manager on the day. Athletes are given all necessary details in their selection notices.

Athletics is a great sport and you will be welcome at Cardiff Athletics. Come and join us - to make new friends, to get fit and to fulfil your talent. We have a long history and many of our past members who have won medals at the world championships or Olympic Games started out as a young schoolboy or girl. Who knows – you too could become one of the best; but, whatever happens, you will have a great time.

The club is run by volunteers and we never have enough. Team managers, coaches, competition officials, helpers in the canteen, fund raising – we are a friendly team and do it for the love of it – can you help?